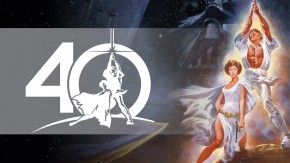 Update! Change in date and place!

There will be a rally in support of the Lucas Museum on May 19th, all interested should check out the event invite on Facebook here. Also check out the Build Lucas website for more info. 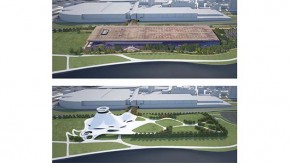 On Sunday, February 6 at 2 p.m., Chicago Force’s new Costume Club held it’s second meeting. Star Wars Celebration III is less than 3 months away, so people came out to work on their costumes. It was held at the Pilsen home of Emma. 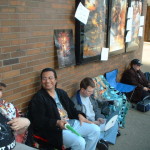 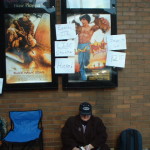 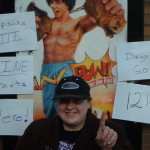 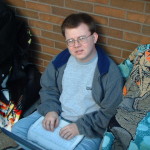 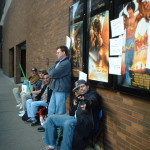 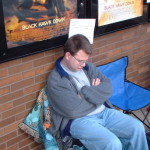 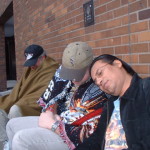 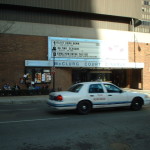 Organized crime was struck a blow today when noted gangster and crime lord Jabba the Hutt passed away. Details are yet unknown, but so far officials have released the following information:

Jabba was captured and taken into custody Sunday morning by CF officials just outside the core world of Chicagoscant. He had erected a smaller yet accurate copy of his Tattooine throne room on the upscale planet of R-Lingtin Hites and was, according to authorities, holding some sort of celebratory gathering.

Due to the size and nature of the Hutt, the Force had to call in their Hazardous Materials truck (Hazmatt) to provide transportation. Jabba was loaded into the vehicle and secured with a gray covering and a rope-like substance.

The Hazmatt vehicle left Chicagoscant and headed south on Imperial highway Fifty-Five (I-55), maintaining a constant speed of 55 MPH (moles per hectare? Hey, if Han can travel a distance in less than 12 parsecs….and have you tried going 55 on the Stevenson? That is the posted limit, but people normally do 80). The trip progressed without incident until they reached Imperial highway Eighty.

Upon turning west onto I-80, the unit was faced with a 35 MPH headwind. This combined with their ground speed of 55 MPH to give a combined airspeed of 90 MPH. The gray covering holding Jabba the Hutt from escape was not designed for such velocities, and it was not long before one of the supporting grommets tore from its fabric and revealed the Huttese crime-lord to the elements.

A word of explanation here for our loyal readers: it is not common knowledge, but Jabba has a rather large indentation in the back of his cranium (watch the movie again, you’ll see it). Also, his skin is very thin and fragile at this point. When the protective tarpaulin was removed, the gale-force air current set up a vortex action between the vehicle and Jabba, causing dire effects. One dismembered arm was caught in the maelstrom and impacted the rear window where it, according to one witness, “stuck there, plaintive and sad, like it was trying to hold on, then it was gone.”

The rush of atmosphere continued its path of destruction. An exposed flap of skin caught in the current and peeled back, exposing the viscera of the great slug. The transport operators immediately brought the vehicle to a stop, but it was too late, the damage had been done. Unable to repair the damage, even to find any of the violently removed pieces, they continued on to the penal colony of Nal-Ottawa.

The remainder of the trip was not kind Jabba’s corpse. Now fully exposed to the wind, small bits and pieces felt free to detach themselves and spread over a large stretch of road. When the transport arrived at its destination, little remained of the once great piece of slime-ridden filth. One of the pilots, who had grown quite close to Jabba during their time together, was taken by his emotions and weeped openly at the sight, causing one passerby to exclaim, “Jeez, Matthew, you’re such a freak. Why did I even marry you in the first place?”

While Jabba is no longer with us, and his time on this plane of existence was brief, we have the comfort that he was laid to rest with the full honors of a crime-lord befitting his stature–in empty dumpster behind an anonymous car wash.

Chicago Force, in the media for Attack of the Clones. Click on the picture for the full article: 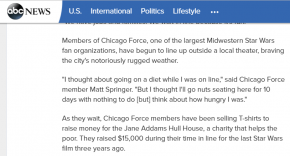 It wasn’t supposed to be finished yet, but we did it.
I got the call at about 8:30 this morning: “We need you down in Star Wars for the rest of the day. The exhibit has to be completed by 4:30.”

“I don’t get it,” I said. “What about Monday?”
“Press preview is Tuesday, but Lucasfilm and the suits will be in there first thing Monday.”
“Shit.”
“Right. When can you be down in Hall E?”
“Well, I’m almost done with Africa as we speak.”
“Good. Park the lift in a quiet spot and hurry down. We’ll be here all day as it is.”
“10-4. Gotta love overtime.” (I’d been at the Field since six.)

Well, enough of my melodrama. Suffice to say that Magic of Myth is up and running in Chicago… just not for the public yet. I just wanted to send out what will probably be the final entry to this little journal (unless something or someone interesting happens on Monday.)

It was worlds of fun working on the exhibit and I got a big kick out of writing these entries every few weeks. I hope all of you who took the time to read my rants enjoyed the vicarious tidbits I was able to offer.

… and I can proudly say that there really isn’t much more for me to talk about that every one of you won’t be experiencing for yourselves next weekend. I’ll be sure to look for a lot of familiar faces next Saturday, and if you’re a new face to the Chicago Force… well, look for the guy who’s clearly enjoying himself more than he should.

One crate. One massive crate resting in the Field’s design loft where our extreme ping-pong table usually sits.

Twenty-five people. Twenty-five people stood around and watched eight exhibit preps (two on each corner) remove the top and three remaining sides of the massive crate sitting in the middle of the Field’s design loft.

When the boards were clear, thirty-five people paused and took a long, quiet look at the thing sitting in the middle of the Field’s design loft that used to be home to the Exhibits staff’s extreme ping pong table.

One Star Destroyer. The Star Destroyer. Eight feet long. 200+ pounds. Thousands of fiber-optic filaments. So many little plastic bits that the surface looks like a recently unearthed Snap-Tite burial ground. The subject of what is arguably the most famous, most gripping opening shot in film history.

And I was holding it in my hands.

Well, ok, not just my hands. Six of us had been carefully positioned (on the corners, along the sides, on the nose) to support its wooden framework for the five-foot journey over to the wheeled mount built specially for Star Destroyer Inter-Museum Transport.

This afternoon was absolutely surreal. We rolled the model into the elevator and headed for the ground floor. As I stood near my position at the back corner of the giant gray pie-wedge of plastic, I looked down to check out the little light bulbs Lucasfilm used to “ignite” the engines.

“Christ,” I whispered, and rattled off a few number codes under my breath.

“What’s up?” asked the rep from the Smithsonian.

“These lights,” I said, “I go through at least five a day here at the museum to keep graphic panels lit in Nature Walk and What Is An Animal. The Underground Adventure has dozens of them. And here they are, part of an image that is so deeply embedded in my head that I don’t remember not knowing it.”

All right, so I wasn’t that articulate at the time, but that’s what I was thinking. I probably said something closer to “wow… incredible…”

Still, the best part of the day came when we got out of the elevator and started the ship toward the soon-to-be-mythical Hall E. Most of our nervous, extremely cautious journey was done behind-the-scenes. But there was a stretch of about thirty or forty feet of public space we needed to cross between the end of the back hallway and the entrance to Hall E. I went ahead to join half a dozen other staff members in order to stop visitor traffic and clear a path for the Star Destroyer.

I stopped a mother and her family on their way out of the Underground Adventure. I apologised for the inconvenience, and told her that we’d be out of the way in a few moments. She correctly guessed that we were transporting an artifact. I said she and her family were welcome to watch, but they had to stay clear.

“With all this attention, it must be prety important,” she said.

In my best Jeremy Irons voice, I turned to her and said “You have no idea.”

No more than a foot of the ship’s nose was out the doorway when the mom realized what was coming into view.

“Kids, look,” she yelped, in the sort of voice she probably hadn’t used since she saw Menudo live when she was fifteen.

We stopped about fifty or so people to clear a path for the model, but by the time we arrived at Hall E, at least 200 people were crowded around ten people; ten people all huddled close together with little white Mickey Mouse-looking gloves on.

Ten people with artifact-protecting gloves. Ten people and one starship.

Le Penguin
“The damage doesn’t look as bad from out here.”

P.S. This is probably as good a time as any to send an extra-special thanks to the good people from SITES (Smithsonian Institute Travelling Exhibits Staff) and the reps from Lucasfilm for putting together such a great show and for being so accommodating to a geeked-out, overzealous fanboy.